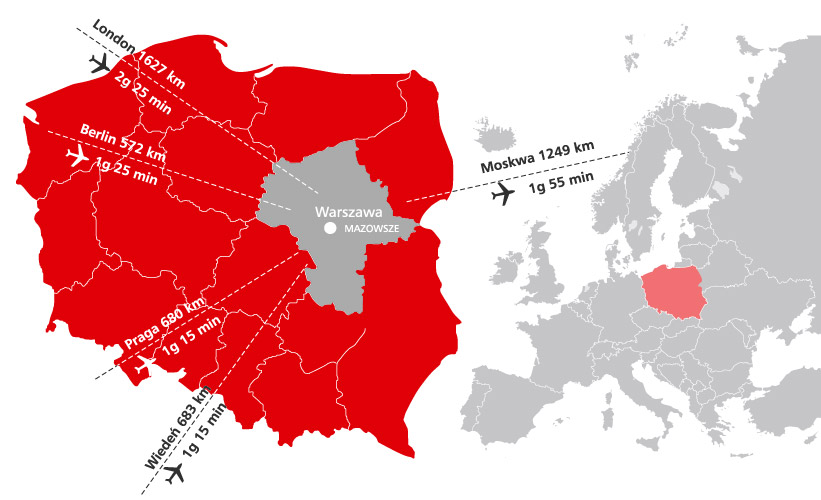 Mazovia, with Warsaw located in its heart, is a region where most domestic films are made and where the film service market is best developed. Mazovia is unique in comparison with the rest of Europe, because modern Polish capital is situated in an area of great ecological potential, very natural and full of picturesque settings. Thanks to that, a film crew may set a comfortable base in Warsaw, temporary or permanent, and with no difficulty travel around the region in distance no longer than 2 hours drive.
Read more

Due to historical conditions, Mazovia is unbelievably rich in sacred architecture buildings, but also estates, and palace-park complexes. Several dozens of historic churches in Warsaw have already staged film weddings, funerals or christenings. But it is worth to leave the capital city to find interesting objects in smaller towns – for example a 17th- century Basilica in Plock or churches in Gora Kalwaria, Szydlowiec and many religious buildings in Radom. Synagogues, orthodox and protestant churches can be found in some of Mazovia towns. Wooden historic churches, which strike with the simple beauty of larch ceilings, are the most unique pieces of religious architecture in Mazovia – away from main roads, saved from WWII operations thanks to being hidden in little towns or villages.
Read more

Mazovia is an architectonic basin for palaces and palace-park complexes. In Warsaw itself, mostly in the Royal Tract, there are about 20 palaces! Although Wilanow and Lazienki have been most popular film sets for years now, many interesting objects can be found outside the city. Zelazowa Wola, Oronsk Polish Sculpture Center, Gombrowicz Museum in Wsola  (Radom), Romanesqueticism Museum in Opinogora, Palaces in Jablonna, Radziejowice or Obory are the most beautiful examples of this architecture genre. Hence, diversity of such buildings is vast and they are all situated no more than 100  km away from Warsaw. The most valuable historic buildings of the region are tremendous castles – two in Warsaw: Ujazdow and Royal Castle, and also in Ciechanow, Czersk, Ilza, and Szydlowiec. Beauty of the parks, estates, romanesquetic manor houses is a magnet and an inspiration for filmmakers who come to visit Mazovia.
Read more

Mazovia is the cradle of Polish agriculture, hence folklore. Mazovia looks amazing from the air: green forests and national parks contrast with yellow and brown rectangles of farm fields, separated with numerous rivers and springs with unregulated, wild banks. In May thousands of kilometers of orchards in Grojec area are covered with white flowers. In Mazovia, you can find heritage parks of agriculture and folk culture, i.e. Zagroda Kurpiowska (Ostroleka), Radom Countryside Museum or Mazovia Countryside Museum in Sieprc.
Read more

Warsaw, the biggest city in Poland, is surrounded with nature which covers some of its urban parts, too. Cities covered with green, forests, woods and landscape parks are Mazovia’s biggest paradox. It is also a great comfort for filmmakers who do not have to travel great distance to shoot in forests or at river banks. There are as many as 177 nature reserves, 62 nature parks and over 4000 natural monuments here. There is a reason for Mazovia to be called “the green heart of Poland”. Kampinos National Park and Kozienicka Primeval Forrest are the most beautiful areas. The variety and picture potential of meandering rivers is simply amazing. Unregulated Vistula river is the most often filmed Polish river, but wild meanders of Bug, Pilica, Narew and Bzura also form beautiful film locations.
Read more

All the natural attractions are concentrated on a relatively small area, an hour or two drive from the Capital. However, it seems impossible to cover the richness of natural resources and landscapes of the area, which ecological values are exceptional for European scale, in a short “touristic” guide. Polish poet, Krzysztof Kamil Baczynski, grasped the character of this central region of Poland in a subtle and concise manner:

Mazovia. Sand, Vistula and the forest.
Mi Mazovia. Smooth, far away –
under stems of humming stars,
under the river of pine trees.